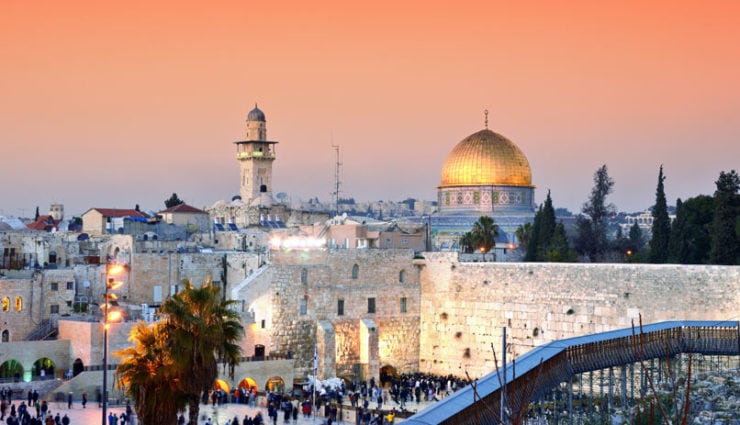 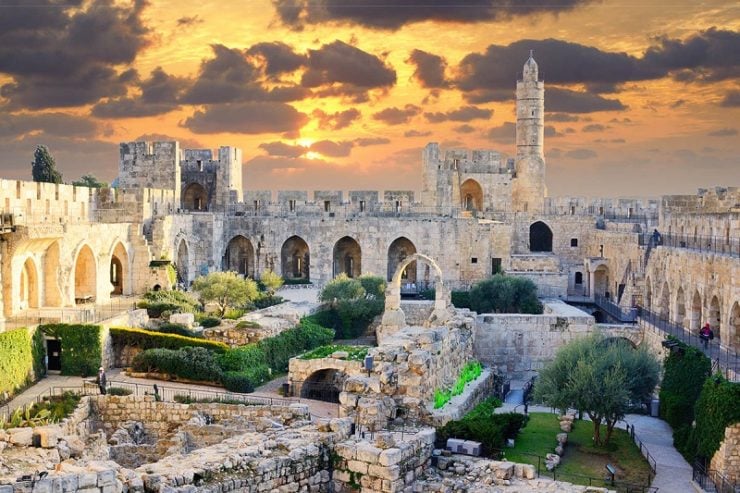 Zion, the Holy Land, the State of Israel – this small piece of land in Western Asia has as many names as the connotations it evokes around the world. It is a region regarded as holy by the world’s three major religions as well as several smaller ones, and since the year 1948 it has also been regarded as a beacon of democracy in the Middle East.

The country covers an area of 22,072 km², roughly the size of the US state of New Jersey. However, what it lacks in space it more than makes up for in geographical landmarks, history, cultural diversity and commerce.

Israel has a population of 9.5 million people (as of April 2022 [1]). Its capital city is Jerusalem, and it has four major metropolitan areas: Tel Aviv, Jerusalem, Haifa and Beersheba.

Israel’s landscape features a populated coastal plain in the west adjoining the Mediterranean Sea; the sparsely inhabited Negev desert in the south, which also features the Ramon Crater – the world’s largest box canyon; and the mountain ranges of the Galilee in the north, coastal Mount Carmel, and the basaltic plateau of the Golan. Situated in the Jordan Rift Valley in the east is the Sea of Galilee, also known as the miraculous Lake of Gennesaret or Lake Tiberias, the world’s lowest freshwater lake (-212 m (696 ft)). The Lower Jordan River connects the lake with the famous salt lake known as the Dead Sea. The surface of the Dead Sea and its shores are 430.5 m (1,412 ft) below sea level, making it Earth’s lowest elevation on dry land.

It would come as no surprise if some of these places sound familiar, as it would be difficult to find an area in Israel that is not mentioned in either the Old Testament, the New Testament or the Quran. In fact, this region has been populated by modern humans for around 120,000 years, as evidenced by fossils found near the Sea of Galilee. Today, the modern State of Israel is inhabited by a heterogeneous population comprised of Jews from diaspora communities around the world, Muslim and Christian Arabs, as well as non- Arab Christians. This cultural abundance is quite visible in Israel’s architecture, music, cuisine and even its spoken languages – while Hebrew and Arabic are the major languages, also prevalent are Russian, Amharic, English and French among others.

Education is highly valued in Israel, with a 97.8% literacy rate and an academic education rate higher than the OECD average [2]. This is well reflected in Israel’s development of cutting-edge technologies in agriculture, software, communications and the life sciences, all of which are successfully exported to the rest of the world. In 2019, Israel was ranked the world’s fifth most innovative country by the Bloomberg Innovation Index [3]. Biotechnology, biomedical, and clinical research account for over half of the country’s scientific publications, and the industrial sector has used this extensive knowledge to develop pharmaceuticals, medical equipment and treatment therapies [4].

Healthcare in Israel is universal, and all residents are entitled to basic health care as a fundamental right. Participation in a medical insurance plan is mandatory for all residents, who have a choice of four official health insurance funds, as well as optional private health insurance. In 2020, Israel’s health system was ranked third most efficient in the world [5]. Public healthcare is highly digitized, enhancing efficiency and providing ample opportunity for remote healthcare options. Furthermore, despite its small geographical span Israel has over 40 general hospitals distributed throughout the country.

Pharma Clinical is ACROSS Global’s partner in Israel. It is an independent, full service contract research organization (CRO) that has been providing services to international and local pharmaceutical companies since 1988.

Pharma Clinical’s expert team, led by CEO and founder Dr. Dan Stolero, provides a ‘one-stop-shop’ of clinical operations services, including project management, clinical trial management, monitoring, regulatory support and several other services. Throughout its many years of operation, the Pharma Clinical team has developed deeply rooted ties with key opinion leaders in the Israeli medical community, across all therapeutic areas. The team has successfully managed over 300 studies in hospitals all over Israel, as well as abroad.

ACROSS Global is a global alliance of CROs that cover 99 countries and provide you with access to more than 8,000 study sites and an almost endless number of potential clinical trial subjects. Whatever type or size of your organization the ACROSS Global™ Alliance makes global studies seamless. ACROSS Global Alliance Pte. Ltd. is a Singapore registered company.